Getting Fitt With Far Infrared

No time to chat now? Email us for more information

The connections between the Infrared spectrum and the mitochondria for detoxification and health are particularly striking. Mark Givert, founder of Get Fitt (Far Infrared Thermal Therapy), held a seminar on the technology for a group of practitioners.

Far Infrared (FIR) Thermal Therapy is included in detoxification programmes, with the latest research showing it to improve vascular endothelial function and blood circulation by upregulating endothelial nitric oxide synthase (eNOS) and thus nitric oxide production (which relaxes the blood vessels). It has been used for conditions such as end-stage heart disease, protection against oxidative stress, inhibition of tumour growth and mitochondrial biogenesis.

FIR energy consists of invisible wavelengths of light (photons) that heat objects directly without having to warm the surrounding air, hence the name ‘radiant heat’.

The three types of infrared rays

The infrared spectrum is 0.76 – 1000 microns (a micron = 1/1,000,000 of a meter), and this is divided into three categories according to wavelength: near infrared, mid infrared and far infrared.

Wavelengths of light are usually measured in microns because the measurements involved are so miniscule (a micron = 1/1,000,000 of a meter).

The infrared spectrum is 0.76 – 1000 microns, and this is divided into three categories according to wavelength, cf. the diagram below illustrating the three infrared bands: 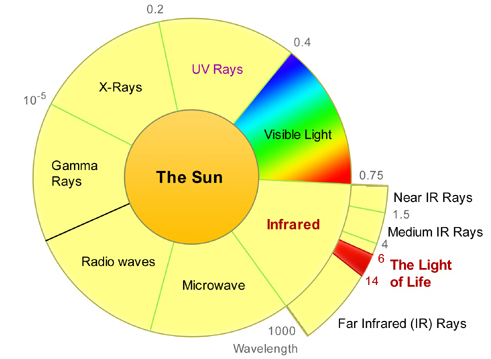 FIR energy generated by the body

Our bodies generate FIR energy, too: it radiates through the skin at 3 to 50 microns, with the most output at 9.4 microns. Palms emit FIR energy in the range of 8 to 14 microns.

When the human body is heated by FIR rays, the atomic activity in our cells is increased and heat can be generated. Research carried out by the Nobel Laureate Albert Szent-Gyorgi (and many others after him) strongly indicates that light can alter metabolic and cellular function. Our tissues normally produce FIR energy for warmth and improved circulation. Body tissues that need a FIR “boost” to aid healing will selectively absorb FIR rays (i.e. photons). After transmitting FIR energy to the tissues, the remaining rays pass onwards without any detrimental effects.

FIR penetrates the body to a greater depth than conventional saunas

FIR energy penetrates the body’s tissues to a depth of over one inch, exciting & vibrating molecular bonds including the water molecules in the body. It also resonates with cellular frequencies[1]. Absorption is close to 93% of the FIR waves that reach the skin.

Traditional saunas rely on hot air having direct contact with the skin to heat the body. FIR saunas create penetrating heat and mildly warm air (that only heats the skin superficially). Only 10% of the heating action of a FIR sauna is used for the air, leaving over 90% available to directly heat the body. This crucial difference means that sweating can be induced at temperatures as low as 36oC – much gentler on patients with heat intolerance (so common in multisystem disorders) than conventional saunas that operate at between 65 -100oC.

A clear role in mitochondrial health

The 2012 article by Vatansever and Hamblin[2] describes how FIR may be opening the ion channels (especially calcium channels) that are extremely common in both inner and outer mitochondrial membranes, thus increasing mitochondrial respiration, and suggests the underlying mechanism is likely to be alterations to cell membrane potential and mitochondrial metabolism.

Patients have certainly reported improved mitochondrial function when tested with, for instance, the Acumen ATP profile before using FIR saunas/cocoons and then after a period of therapy, such as six months later. Studies are currently underway to elucidate the mechanism of action more exactly, but clinical evidence of improvement is its own testimonial, as substantiated by Dr. Sarah Myhill et al in their 2013 article in the International Journal of Clinical and Experimental Medicine [3]: “… high levels of pesticides or volatile organic compounds can be treated by far-infrared saunas (FIRS), which have also been shown to have other beneficial effects in fibromyalgia and other illnesses.”